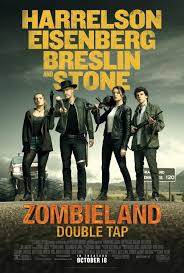 Despite having a comedic dynamic ensemble, Zomebieland: Double Tap falls flat due to
its weak plot and premise.

Zombieland: Double Tap is the sequel to the 2009 film Zombieland which follows four unlikely individuals,
Woody Harrelson as Tallahassee, Jesse Eisenberg as Colombus, Emma Stone as Wichita and Abigail Breslin as Litte Rock, through a zombie apocalypse.

The sequel continues with these four protagonists’ stories after living in the apocalypse for ten years and how the world is changed over the course of the decade.

A new species of zombies or Z’s are introduced into this plotline as well as new characters like Madison portrayed by actress Zoey Deutch, Reno played by Rosario Dawson, Flagstaff by Thomas Middleditch, and Albuquerque as portrayed by Luke Wilson, although two above mentioned characters were integral to the film another pair were only really used for the
trailer.